With Oleg Kivokurtsev, co-founder and CBDO of Promobot, we discussed the current state of robotics education, how to organize the process of learning, and if it’s possible to get a robot-related job without a diploma. 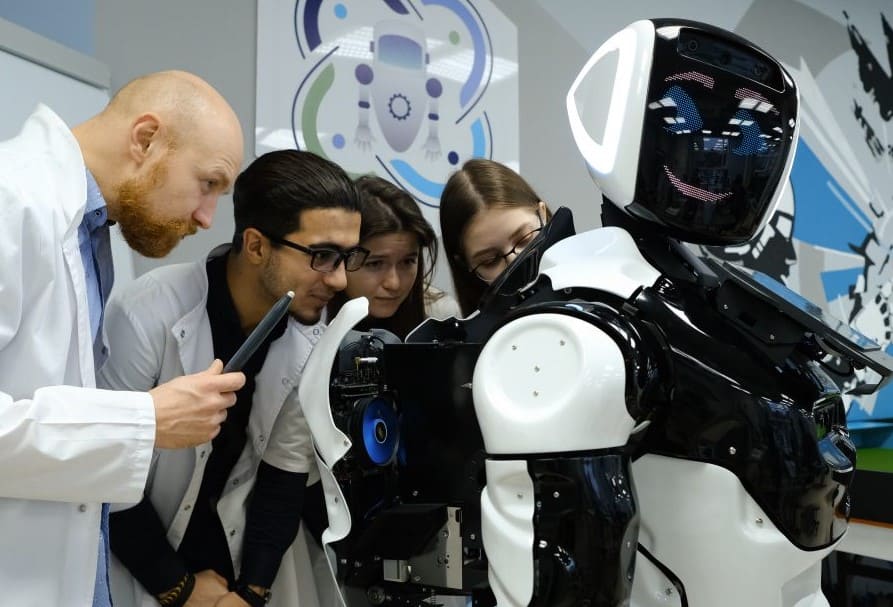 Oleg, do you think considering a career as early as school years is essential? Would you agree with this approach?

— I think there are two sides to this story. Each child is different: for some, robotics classes could suppress creativity that might develop in other areas. I know that from experience: many children find their potential in the latter years of school. Suppose a child had a bad experience with robotics in the second grade. In that case, they’ll always contrast that experience with any passion that they pick up in the future. They don’t realize that learning robotics in the second grade is way different than when you’re almost a freshman, but the impression is already there.

Children go to their first robotics class with high expectations. Because of pop culture, they already have predisposed ideas towards robots and how to create them. They think of them as terminators and transformers when, in reality, they’ll probably start with a LEGO set. Keep in mind that we’re still at the ground level ― the real robotics will come later.

There are three fields of robotics: mechanics, programming, and hardware engineering. A second-grader with LEGO will not learn robotics as they pertain to reality. They utilize a toy that doesn’t teach them to do actual work: for programming, they use closed platforms that differ significantly from what the industry employs in real life.

When do you think it becomes more relevant to teach robotics? How should the process be organized?

First and foremost, it shouldn’t be a mandatory subject: make sure it remains an after-class activity. Then, ensure actual classes are taught well, mostly CS and physics. Once a child understands natural sciences and programming, even a little ― they’ll be fine. Some schools have a step system: first, they involve a first-grader in mechanics and construction, and then gradually increase the difficulty. Soon, kids start learning the basics of programming. By the 9th grade, they already program robots. My idea is similar: children get tasks and training according to their age and prior experience, motivating them to learn more and continuously do better.

So, you would hire an undergraduate student without a higher education but with the knowledge necessary to do the job?

— If the student is 18 years old, why not? Really, there are so many tasks one could fulfill without higher education.

Do you need higher education to be a robotics specialist?

— You need higher education to be a part of the workforce. Today, robotic companies are few and far between: a handful of manufacturers serve the entire market worldwide. It means that there is no pipeline to prepare robotics specialists from the get-go. In robotics, three types of specialists are needed: mechanics, developers, and engineers.

So, you cannot have a universal robotics specialist?

— I don’t think so. I have never seen anybody who is a sufficient mechanic, developer, and engineer all at the same time. Even if we imagine a program that would teach all three, it would be too overwhelming. If we combine all three specialties, we will get from 10 to 15 years of course time! Do you think the students can handle that? Because if we start limiting hours, we will restrict the depth of each subject all the same.

Be that as it may, robotics is an important subject, and we need to advance it in our educational process. It increases the number of specialists, makes young people more aware of their potential, and many other positive things.

What can we do to advance the robotics industry?

— First, we need more production and companies that are willing to push robotics further. We need to create more jobs for our current specialists. Furthermore, we need to provide the most relevant secondary education for young people, and later keep it up with high education in math, physics, and computer science.

How advanced is the robotics industry now: what are the companies, do they need specialists, is there a staff shortage?

— I think it’s going well for children and high schoolers. We have multiple robotics schools and organizations. The children are still interested in robotics; parents are interested in their kids getting a career in such a prospective industry.

As far as companies go, it’s not as well ― like I said, there aren’t that many robotics companies working right now. I would imagine there are a few dozens where I’m from.
A lot of countries offer grants not only for students but also for entrepreneurs. I would love people and governments to focus on that. Everything’s fine as far as education goes; what we need now is to teach young people, or rather people as a whole, how to be entrepreneurs.