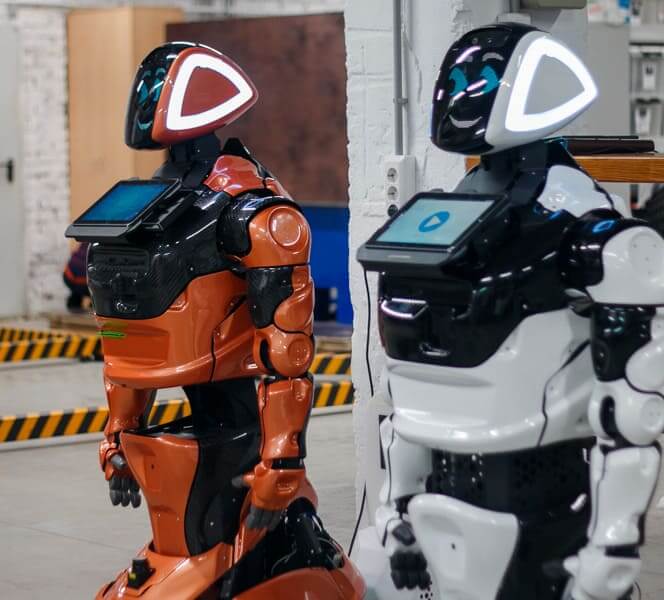 This year we moved to a new site, expanding the production area by four times. Now the last stages of finishing are being completed, but the robots of Promobot are being developed and assembled in one building.

The robot Promobot is a versatile robotic platform. And in 2018 this advantage was used to the maximum. Promobot has 8 new cases of practical application – Retail, Bank, Guide, Airport, Concierge, Multifunctional Center for Рrovision of State and Municipal Services, shopping center. For each was developed a unique set of features in demand in the industry.

Users of Promobot now have access to Motion Studio Service. Using this service, you can create your own gestures, facial expressions and dances for the robot. The developers continue to improve the service and the next update is already available, thanks to which the work with the service has become easier and more enjoyable.

In July 2018, the Promobot company has supplied 17 robots for export. The buyer was ASTANA EXPO 2017 – the largest exhibition center in Central Asia. The robots will work as consultants, autonomously move through the exhibition halls, communicate with visitors, talk about exhibits and events and help navigate the exhibition center.

Promobot developed a police robot and sold it to the Department of internal Affairs (DIA) of Kazakhstan, its task is to alert law enforcement agencies in case of danger. The robot is integrated with a system of accounting for violators of DVD, it records what is happening around on a video camera, can recognize in the face of offenders and notify the police about the location, as well as to take fingerprints and verify them with the database DIA.

The elimination of fire

In the US a case study on the use of Promobot in the school security system is being developed. Recently, it went to test the system in one of the American schools, where it met with students.

Children liked the robot very much. And after it said that it could homework for them, and it caused an ovation.

Russian robot Promobot became the leading sports news on the American TV channel FOX Sport. For 16 weeks, Promobot went on the air to comment on the matches and predict the outcome of the game. Especially for this partner of the manufacturer-Intellitronix has developed a neural network, which is trained on the results of previous seasons and allows the robot to predict the outcome of sports matches.

Last year we took part in the Consumer Electronic Show for the first time, where we presented a new version of the robot – Promobot V. 4. It was a great adventure, to which we devoted several articles and 6 issues in the blog of the site.

This year we are going to CES again, we will present a number of improvements and new application cases, including a robot concierge, a robot consultant and even a robot empath.

As part of the exhibition, we will stream and share news with you!

Stay tuned for updates on the website and social networks of Promobot!