An experiment was conducted in the field of human-machine interaction in the service industry. The results were unexpected. 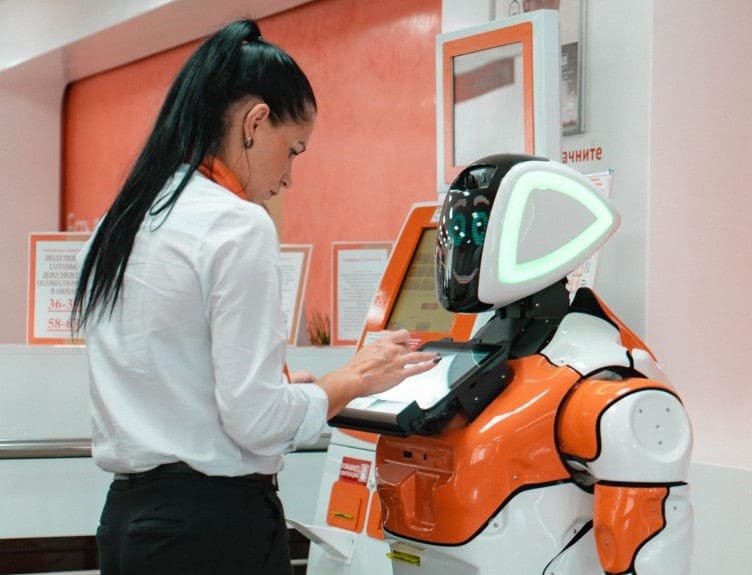 After interaction with the robot, people are 30% more likely to receive the service in the public sector via robots again in the future. A study that features a service robotics company Promobot and a board of experts and scientists was organized. This study is dedicated to social attitudes people have towards robots. The experiment took place in a real environment of one of public service offices.

The experiment involved passport replacements under four different scenarios. The first two involved a direct communication between a robot Promobot V.4 and an office employee that issues passport replacements. The other two scenarios involved a mixed communication with the visitor: first is the office employee that uses Promobot’s dialogue system for communication (subject ‘human-robot’). The second is Promobot V.4 that is being operated by an employee remotely (subject ‘robot-human’). The participants didn’t know if the robot was operated remotely or if the employee’s responses were from the robot’s script.

The study was conducted in two parts: the first is a laboratory experiment and the second is a real environment experiment. The participants didn’t notice any difference between direct and mixed communication methods, which means there was no difference for them in communication with the real employee and the robot, as well as two subjects ‘human-robot’ and ‘robot-human’. All the participants were informed that they are taking part in the experiment.

Study shows that the perception and the client’s reaction depends largely on the interface that they use, rather than content of their communication. That means, the visible identity played the biggest part in determining the visitor’s reaction, both in case of getting service from the employee or the robot in front of them. In other words, when asked to evaluate the quality of service that they received, most participants were equally favorable to the standard interaction with the human employee as they were to the human employee that used robot’s script in their work. Interestingly, the ‘human-robot’ was commended for their ease of communication, even compared to the employee that didn’t use the robot’s script.

“This study allows us to determine if we are on the right path in developing the new service solutions as they relate to robotics. The results show that there will be a demand for our solution of a robotized humanoid companion. Before that it was just a theory, right now we are getting concrete empirical data that supports this idea.” ― noted Alexey Yuzhakov, Promobot CEO.

Out of four communication scenarios the best results were demonstrated in the case of ‘human-robot’. It received the most positive feedback from the office visitors. The participants noted that the employee that operates under the robot’s script is polite, calm, positive and that it provides high-quality service.

“One thing we didn’t mention in the final publication of the study. The employees at the office themselves mentioned how hard it is for them to imitate the robot’s approach and behavior, even though it received the best feedback out of all the scenarios. Therefore, using robots to provide such services would be significantly more comfortable for those who are looking to receive them.” ― says Olga Ganina, sociologist.

The real environment experiment also demonstrates that three out of four people are looking to receive their services from Promobot V.4.

The communication with Promobot V.4 was highly rated by participants in the age group below 30 years old, as well as participants who utilize new technologies in their daily life and generally express interest towards robotics and technologies in general. However, the more cunning and knowledgeable people in this field rated the communication with the robot relatively low. Experts assume that those participants have very high expectations and preconditions going into the exchange.

“Another advantage that participants noted during their interaction with the robot is the psychological comfort: they don’t feel the pressure from the human employee, they are not in a hurry, they don’t need to engage emotionally with another person while receiving a service. In a sense, Promobot V.4 acts as a self-service solution, which is a big advantage that it has over its human counterpart.” ― concludes Elena Seredkina, Philosophy PhD.

The laboratory experiment took place at Promobot headquarters. It involved 40 participants. During the real experiment, more than 200 people participated when visiting their public service office. The study was conducted by the board of experts at Perm National Research Polytechnic University in cooperation with Promobot LLC.

Promobot company was founded in 2015. Today, Promobot is the largest manufacturer of autonomous service robots in Northern and Eastern Europe. Promobots work in 37 countries as administrators, promoters, consultants, guides and building managers. Promobot robots assist and optimize the workforce and can be found in the metro, Dubai Mall, IKEA stores and other crowded places.