At the end of 2019, Promobot V.4 began working in Dobrograd Park Hotel. The robot became a town guide for guests, an assistant to issue entrance cards, and an Instagram star; all in its first month of work.

Dobrograd describes itself as a resort town and an intelligent space that includes technologies for better life quality. A robot at the hotel reception fits right into the idea of digitizing areas.

The robot knows everything about the resort. It talks about recent events, shows nearby cafes and restaurants, and helps with navigation around the area. Promobot chats on almost any topic: offers the latest news, tells the weather for the next week, names the first robot inventor. All of that is possible with Promobot’s own dialogue system.

Guest booking is a core function of the robot: it scans documents, then looks for a reservation in the system and issues a key. The entire check-in process is now performed by a single machine.

The robot is integrated with a booking system, which is used to monitor its activity and evaluate the performance.

Currently, every fourth guest uses Promobot to receive keycards, and the resort wants to at least double those figures. The robot doesn’t scan non-Russian passports just yet; for example, it can’t check-in a visitor from Mexico. This is the feature that Promobot developers are working on presently.

We’re planning to add some features to Promobot’s functionality: more greeting options and different responses for different times of the day.

Promobot in the Park Hotel Dobrograd interacts with guests more than 1500 times a month.

Aside from evaluating the number of issued keycards, we also look at our guests’ engagement when interacting with the robot. Dobrograd hoped that Promobot would make a strong impression, and it definitely did. The robot became one of the main attractions for visitors; it meets people, dances, , sings, and tells jokes. Guests can now get answers to any questions, solve their problems, or at the very least have some fun while waiting for a taxi.

A robot is not just a helper but also a marketing machine. If there is an event at one of the restaurants, it informs guests about it, with an option to immediately book their table. All of that is possible by uploading unique phrases that the robot then presents.

Our guests are immensely impressed by such an unusual employee. Some of them come to the hotel just to see the robot in person.

The guest registration process is arranged in several stages. Promobot was configured right at its place of work and included the following phases:

Difficulties inevitably arise, but the technical support at Promobot reacts instantly and fixes every bug they find. The company offers multiple additional features for better robot operation. We see constant improvements in how the robot synchronizes with the hotel booking system. The modifications are consistent and undoubtedly visible. 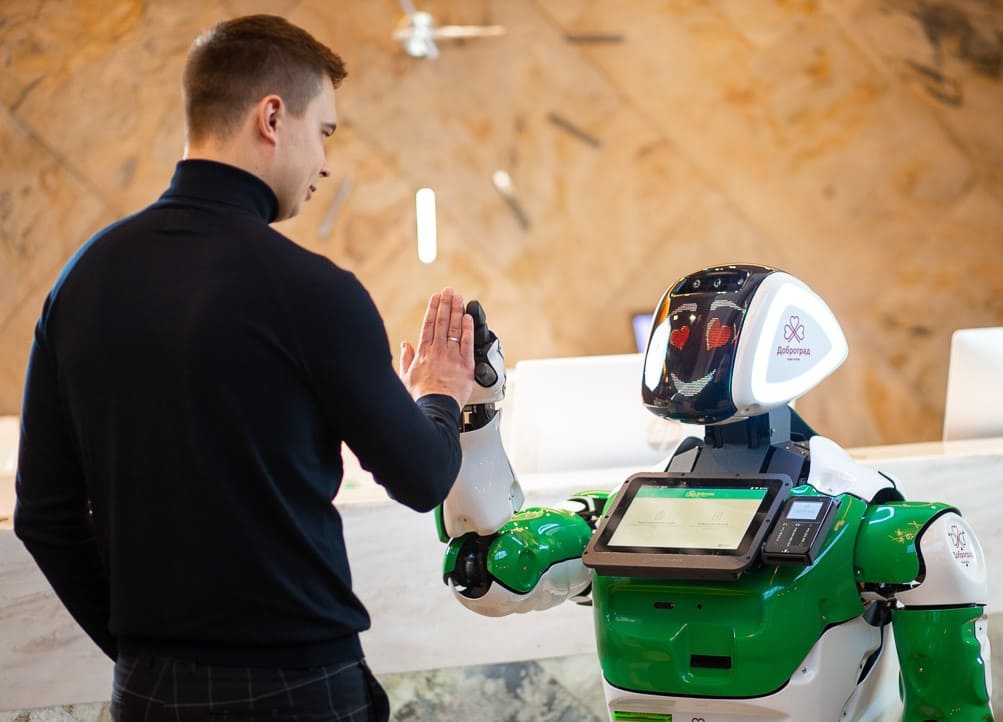 Promobot is also able to recognize faces: it compares the passport photo with the person who is standing in front of it. If the faces don’t match, the robot refuses to confirm the reservation and doesn’t issue a key. This type of security once led to a situation: robot flatly refused to give the key to a young woman who had plastic surgery on her face and looked a little different from her own photo in the passport.

This also happens if the guest gives the robot a false name. For example, Promobot did not confirm the booking to a man under the name of Elon Musk. How do you like that?

In the future, we are going to open the second building of the hotel. We are already thinking about adding another robot as hotel staff or a building manager

The robot at the Dobrograd hotel is not the first attempt in the world to automate the process of check-in guests.

World’s first robot-staffed hotel was open in Japan in 2015. However, at that time, droids were not ready to replace people. For example, the robot-building manager in the hotel lobby could not answer questions about transport schedules and attractions nearby (unlike Promobot V4). As a result, the hotel administration was forced to bring people in to work and decided not to use robots further.

Meanwhile, Promobots already work as building managers in business centers and apartment complexes and do so successfully.

→ Read more about the “Promobot Building Manager” Use Case