Promobot as a hotel manager appeared in the Park Hotel Dobrograd at the end of 2019. The robot became a town guide for the hotel’s guests, an assistant for issuing key cards and Instagram star in its first month of work. 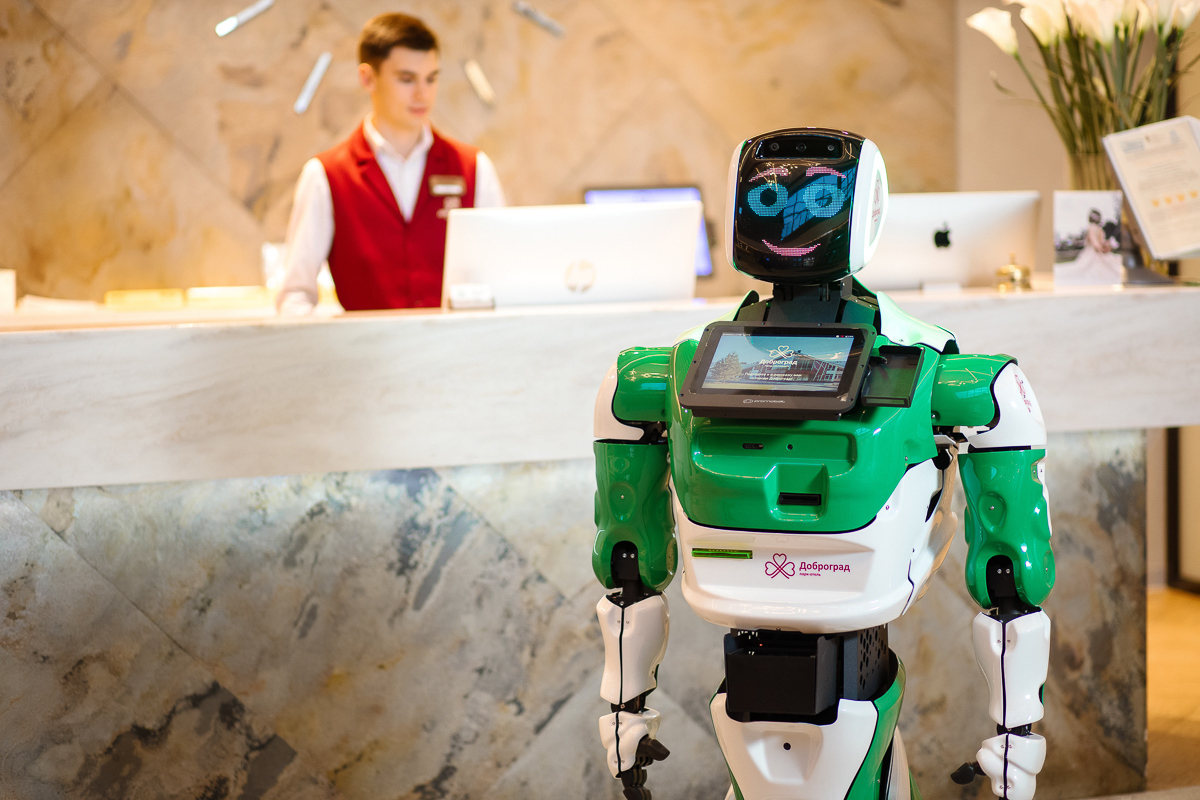 According to the hotel representatives, the concept of Dobrograd resort town is an intelligent space which includes the most advanced technologies for life. Therefore, the robot that works at the hotel reception is consistent with the general idea of digitalization of spaces.

Robot knows everything about the infrastructure of Dobrograd. It will tell you about today’s events, show nearby cafe or restaurant and provide tennis court location. Promobot can chat with a guest on any topic: discuss the latest news, tell the weather for the next week or name the first robot inventor. It presents that info thanks to its dialogue system that uses the linguistic database developed by Promobot LLC.

Hotel guests’ registration is a core function of the robot. Robot scans the passport of all the new visitors, searches for a reservation in the system and issues a key. In short, it independently performs the check-in process. 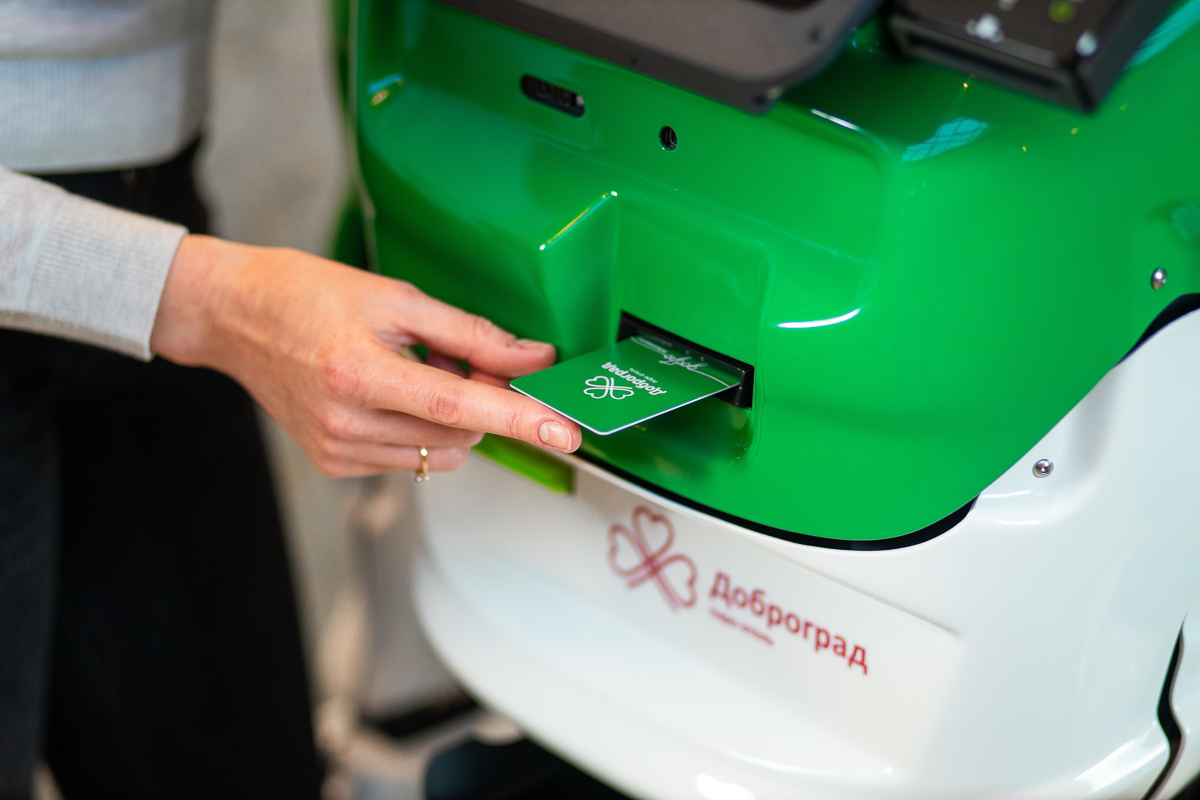 The hotel administration observes the robot’s activity through booking system that it integrated with. It is also a way to evaluate the robot’s performance.

Currently, 25% of the total number of guests receives room keys via the robot. This figure is planned to be doubled at least. The robot is unable to scan non-Russian passports just yet; for example, it can’t check-in a visitor from Mexico. This is the feature that Promobot developers are working on presently.

We’re planning to add some features to Promobot’s functionality, such as greeting options and different scripts depending on the time of day. 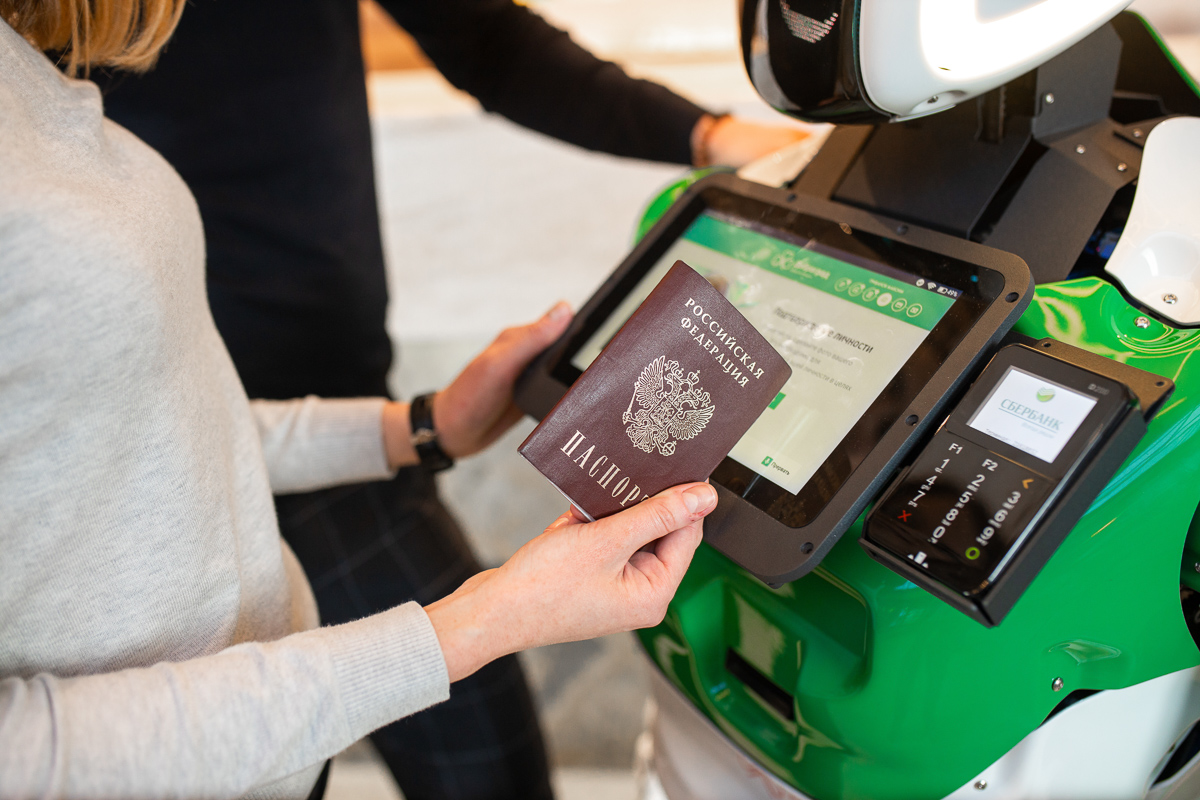 Promobot in the Park Hotel Dobrograd interacts with guests about 1500 times a month. 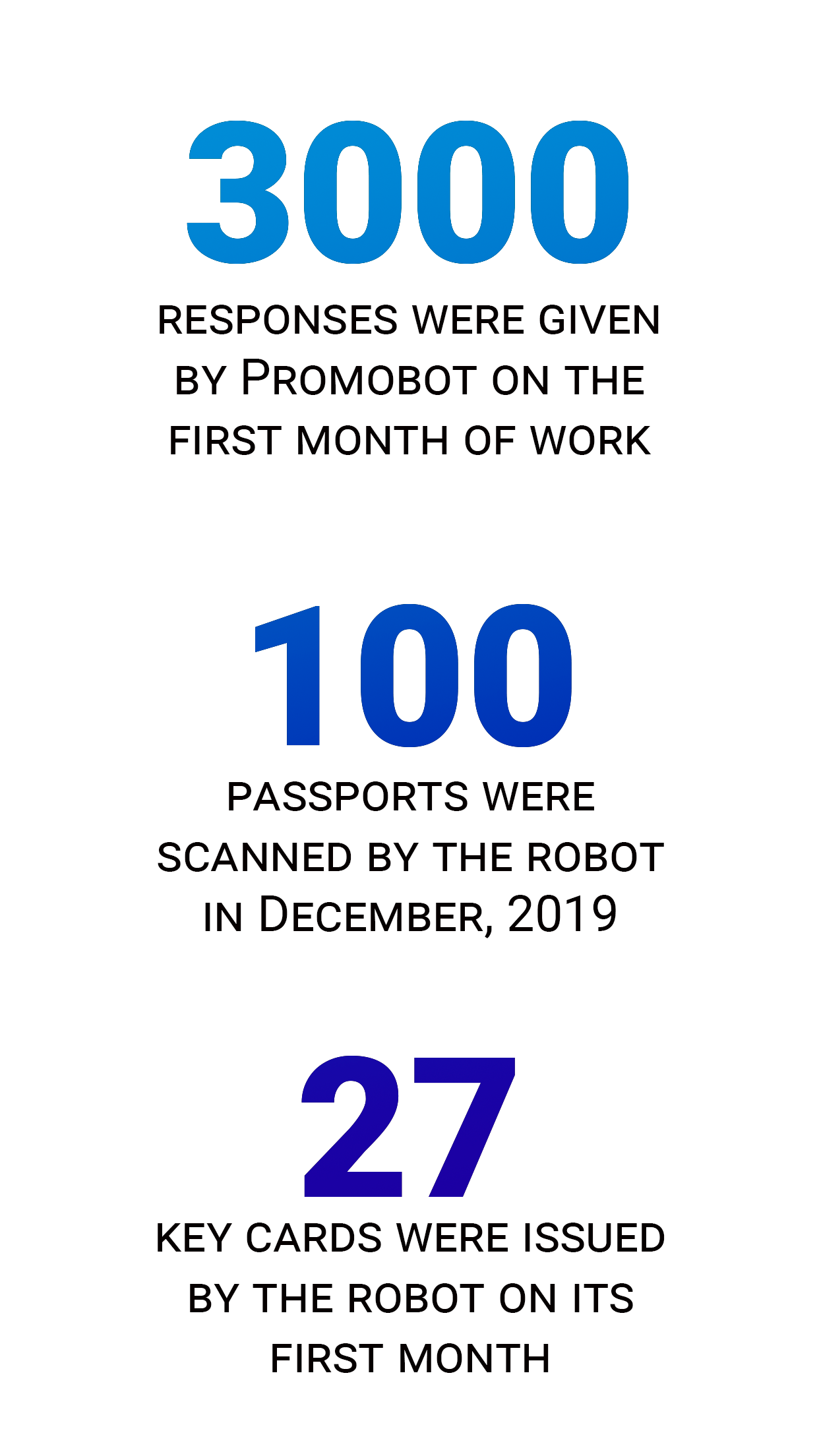 Aside from the number of cards issued, the guests’ interest was also evaluated in the process. Dobrograd administration hoped to make a strong impression with the appearance of Promobot, and that goal was achieved. Robot became one of the main attractions for hotel guests. It meets guests, dances, sings and tells jokes. This way guests spend their time while waiting for a taxi, receive responses to their questions or solve their problems at the reception.

The robot is an additional tool of promotion. If an event takes place at one of the restaurants in the evening, it informs guests about and invites them to book a table. There is an option to upload special promotional phrases to the robot for that.

Our guests are still impressed by the appearance of such employee. Some even come to the hotel just to see the robot in person

The launch of the guest registration function was arranged in several stages. The robot as the hotel administrator was configured in real conditions for the first time ever. That includes:

Sometimes difficulties arose, but the technical support at Promobot reacts instantly and fixes bugs. Moreover, we are constantly offered additional features to avoid further failures of robot’s work and its synchronization with the hotel booking system. You could say that all the improvements are ongoing 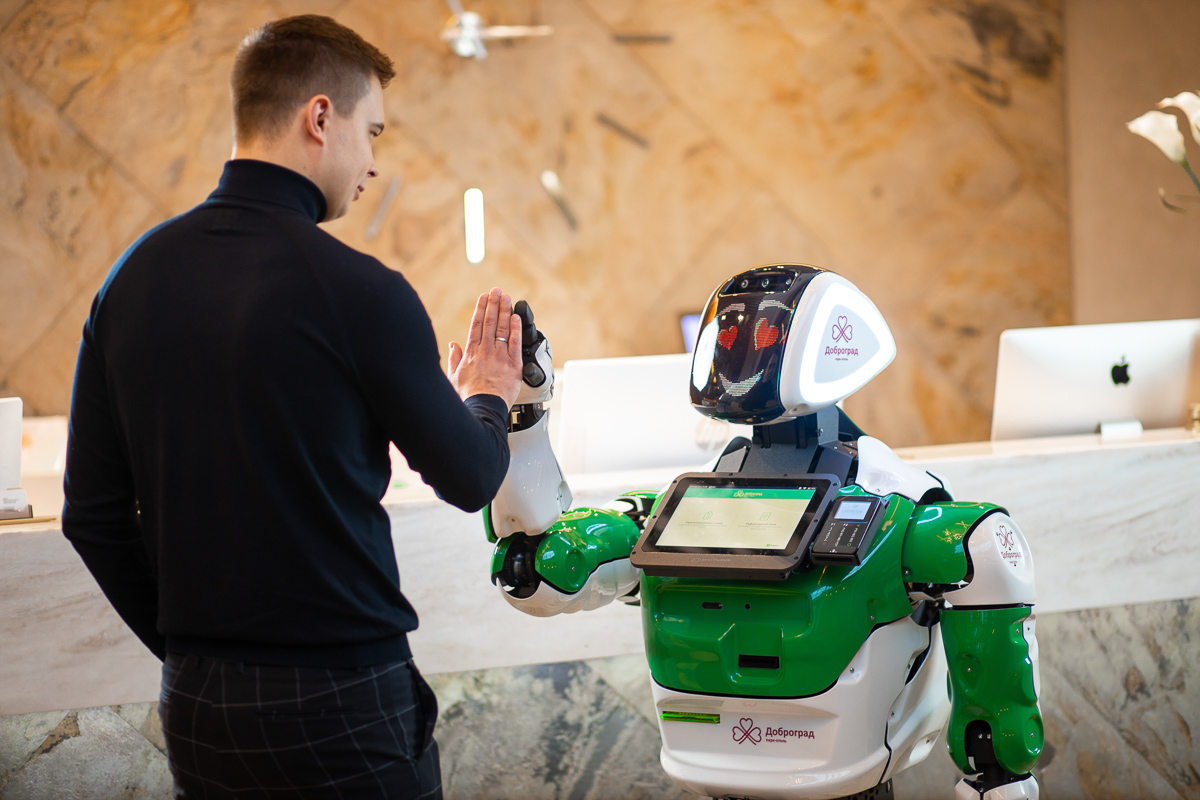 Promobot is also able to recognize faces: it compares the passport photo with the person who is standing in front of it. If the faces don’t match, the robot refuses to confirm the reservation and doesn’t issue a key. This type of security once led to a situation: robot flatly refused to give the key to a young woman who had plastic surgery on her face and looked a little different from her own photo in the passport.

This also happens if the guest gives the robot a false name. For example, Promobot did not confirm the booking to a man under the name of Elon Musk. How do you like that?

In the future, we are going to open the second building of the hotel. We are already thinking about adding another robot as hotel staff or a building manager 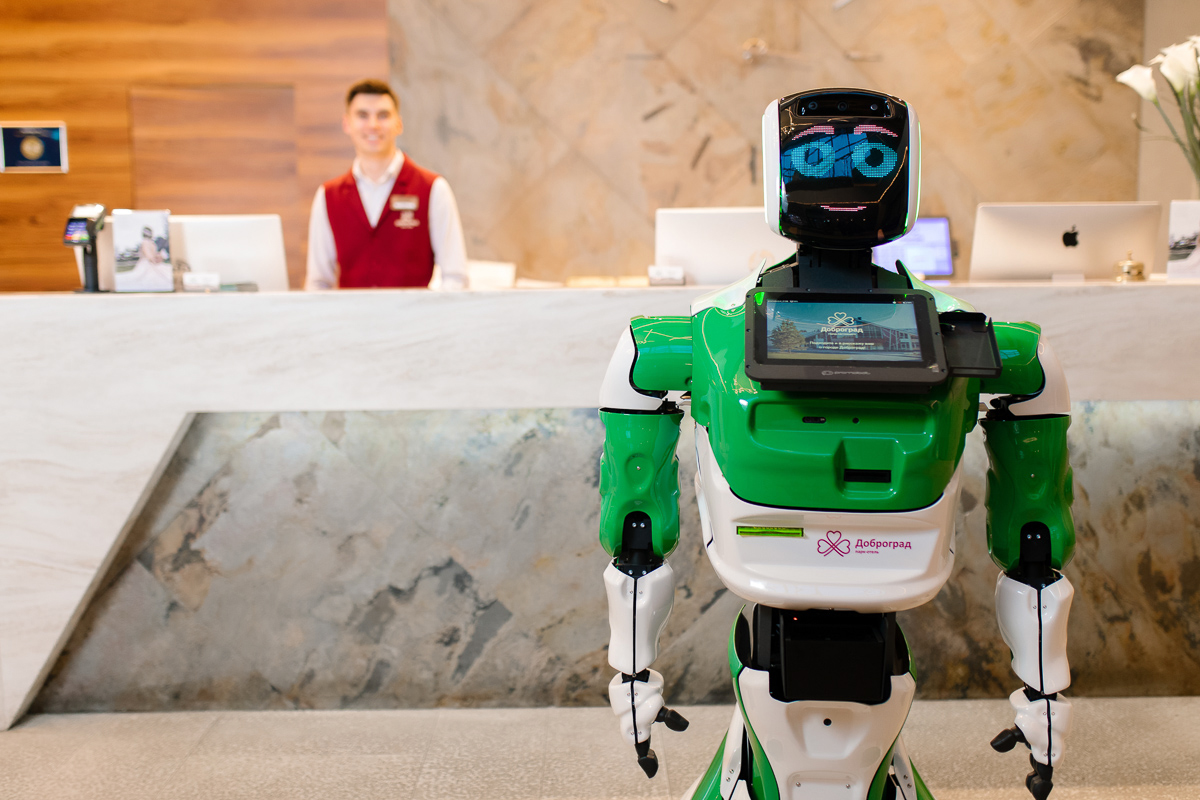 The robot at the Dobrograd hotel is not the first attempt in the world to automate the process of check-in guests.

World’s first robot-staffed hotel was open in Japan in 2015. However, at that time, droids were not ready to replace people. For example, the robot-building manager in the hotel lobby could not answer questions about transport schedules and attractions nearby (unlike Promobot V4). As a result, the hotel administration was forced to bring people in to work and decided not to use robots further.

Meanwhile, Promobots already work as building managers in business centers and apartment complexes in Moscow and New York, and do so successfully.

→ Read more about the “Promobot Building Manager” Use Case