Robot will simulate a doctor’s appointment and evaluate the knowledge of students in a medical university. 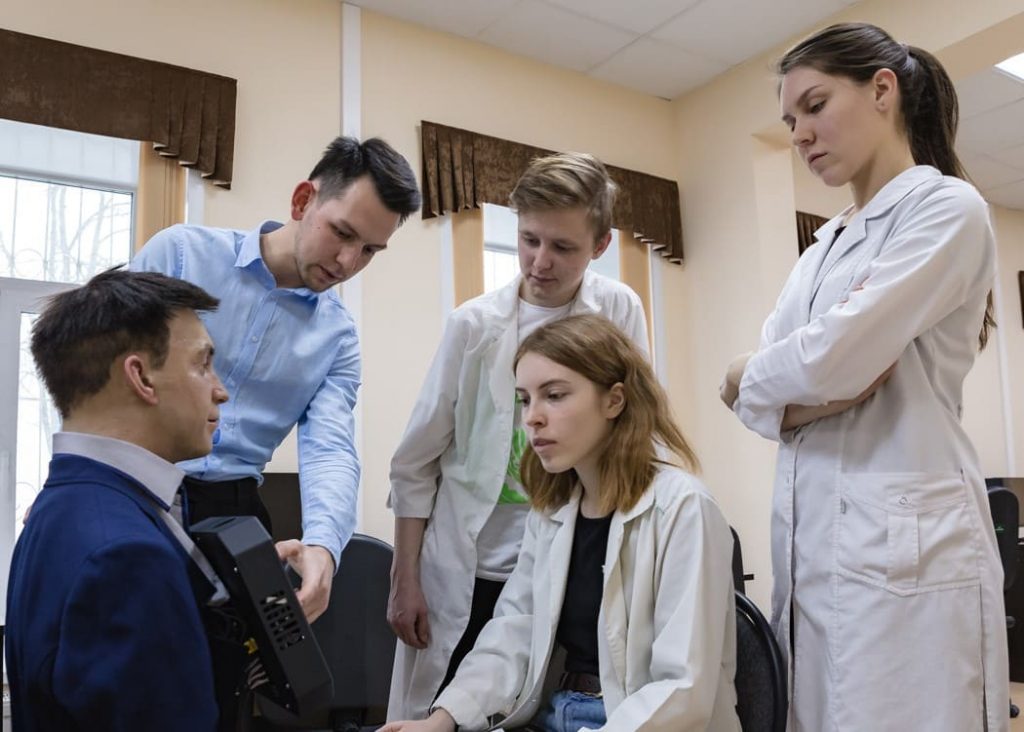 Promobot, in partnership with Perm State Medical University, has developed an autonomous robot simulator for students on the basis of a humanoid robot Robo-C.

Robo-C is a completely anthropomorphic machine. It performs human facial expressions such as eyes, eyebrows and lip movements, as well as other muscle movements. Robo-C can also chat and answer questions. The technology was developed by Promobot and because of its patented design there are more than 600 facial expressions that allow the robot to mimic human appearance. Company specialists created their own component base, and also developed a unique artificial skin of the robot.

Robo-C simulates the behavior of a patient at a doctor’s appointment. Before the robot was introduced students would stage this situation with a person. PSMU specialists have prepared several scenarios for the robot’s behavior, including a detailed description of complaints, conditions, patient age, analysis data, and other criteria. Students should conduct an initial survey, give diagnosis, prescribe treatment or send for further examination and tests. Robot responds to key words and actions of the student and simulates the dialogue between the patient and the doctor.

“Today, simulation equipment is actively used in the training of medical students. All graduates pass the accreditation procedure for admission to work. To do that they interact with various training mannequins. The new robot allows not only to create the closest simulation but also allows the student to immerse themselves in the situation and thus form the clinical thinking in accordance with their speciality. It is an essential trait of future doctors. In a sense, by acting as a patient, the robot also becomes a teacher that evaluates every word and action of the student; this information is digitally collected and sent to the real teacher. The introduction of such solutions will allow us to reach a new level of medical education.” – says Andrey Baydarov, director of IT and innovative development at PSMU.

At the end of the session, robot summarizes the results of the appointment. It analyzes the sequencing of questions presented by the student in accordance with clinical recommendations. Afterwards, it evaluates how accurately the diagnosis is made and what treatment is prescribed. Robot also stores every action and question during the session — students can review the information and make improvements for the future. The obtained results and appointment history are sent to the teacher for further review of the student’s performance. Afterwards the teacher can decide if the student passed an exam or ask additional questions.

“The robot simulator is a universal solution. It can be used during exam preparation or to train interactions with people from different medical specialties. Human resources are limited while the robot can work 24 hours a day — it never gets tired, it’s never wrong in its assessment of student’s knowledge and its decision making will not be affected by mood change or other factors. In short, it eliminates human factor and evaluates objective, encyclopedic knowledge. At the same time, upon reviewing the session, teachers will be able to evaluate students’ creativity, out of the box thinking and approach to work. There is a medicine term for when the doctor asks a series of questions based on the patient’s responses. That sequence is called clinical thinking and it allows to give diagnosis and choose the correct treatment strategy. The development of clinical thinking is the primary purpose of the robot.” ― says Oleg Kivokurtsev, CBDO of Promobot.

Promobot company was founded in 2015. Today, Promobot is the largest manufacturer of autonomous service robots in Northern and Eastern Europe. Promobots work in 37 countries as administrators, promoters, consultants, guides and building managers. Promobot robots assist and optimize the workforce and can be found in the metro, Dubai Mall, IKEA stores and other crowded places.

Perm State Medical University, named after academician E. A. Vagner, is one of the largest medical universities. More than 87.7% of full-time university teachers at PSMU have an academic degree in their specialties. It is the highest rate among universities in Perm, as well as one of the highest among medical universities in the country. PSMU trains specialists in the field of medicine, pediatrics, dentistry, medical and preventive medicine, as well as clinical psychology. Students study anatomy, physiology, cardiology, surgery, neurology, epidemiology, and other fields and disciplines.